Najib Razak must be really desperate to win the election. Now he and his BN coalition are being featured in this 50-page comic that is allegedly being distributed to teachers by state education departments. The Malaysian Insider broke this story on Friday and even managed to obtain a copy of this booklet – which depicts a caricature of the Prime Minister against the national flag and a quartet that appear to represent Malaysia’s diverse ethnic groups with the words, “I wouldn’t break your trust” on the front cover. 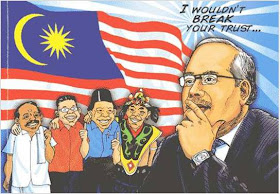 And within the pages are a variety of graphic illustrations that praise the BN’s leadership and policies, such as how the Najib administration has helped provide incentives to youths for more jobs under the 1Malaysia policy. To feed Najib’s ballooning ego, an illustration on page 38 portrays Najib decked out in a superhero outfit and flying above a crowd with speech bubbles proclaiming “Hi! Superman”! 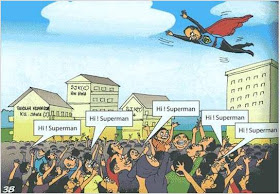 While the BN is painted in the best positive lighjt, opposition political figures are shown in a downright negative and even vulgar and sinister manner, such as on page 31 of the booklet, which has a goateed man in glasses dressed in a singlet cuddling two half-naked men that appear to be linked to Najib’s rival, Anwar Ibrahim. Pray tell me if this is not evidence of gutter politics practised by UMNO? The stench is unbelievably foul. 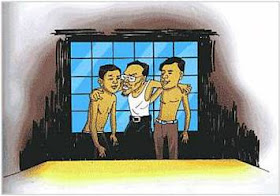 According to this same report, not all schools have received the comic book. Some senior teachers contacted by The Malaysian Insider claimed ignorance of the matter. And the education ministry has yet to respond to requests to clarify the allegation.

For Najib and his henchmen to stoop so low – it is obvious that he is totally bankrupt of ideas. Can Malaysians still have any respect for Najib?
Glam at 16:00
Share